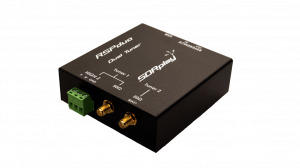 Today at the Dayton Hamvention, SDRplay is announcing the launch of a new Software Defined Radio product – the RSPduo.

The RSPduo is a radical new addition to the RSP line of SDR receivers from SDRplay. Architecturally, it is different from any previous RSP in that it features dual independent tuners, both piped through a single high-speed USB 2.0 interface.

The SDRplay RSPduo is a dual-tuner wideband full featured 14-bit SDR which covers the entire RF spectrum from 1kHz to 2GHz giving 10MHz of spectrum visibility. Initially using Windows based ‘SDRuno’ supplied by SDRplay, you can simultaneously monitor two completely separate 2MHz bands of spectrum anywhere between 1kHz and 2GHz.

Superficially the RSPduo looks identical to the highly popular RSP2pro and will be able to operate in a very similar way. However, it also allows a completely new and exciting set of usage scenarios such as:

Scenario 3 is very difficult to achieve with two separate USB devices because of the uncertainty of USB latency. The RSPduo overcomes this limitation because all traffic goes through a single USB interface, thus enabling the possibility of the development of various types of diversity demodulation such as: spatial, frequency and polarisation which can bring huge benefits in terms of improved performance.

As well as adding a second independently controlled tuner, which in itself, offers a whole new set of exciting usage possibilities, the SDRduo features 14bit ADCs and a completely re-designed RF front end. These changes provide better RF selectivity and even more dynamic range, offering outstanding performance under extremely challenging reception conditions. The combination of performance and features makes the RSPduo our highest spec RSP yet and sets a new benchmark in the sub $300 SDR market.

Lots of great new videos are appearing on YouTube showing the Dual Tuner RSPduo in use. Just search for RSPduo in the YouTube Search bar.