This forum is now suspended and will not accept any new posts or account registrations. For technical support relating to SDRplay hardware or software, please open up a support ticket via www.sdrplay.com/support
http://www.sdrplay.com/community/

Fake stations on the spectrum

Fake stations on the spectrum

by DVE
Hi all.

I had previously SDRPlay1 and now I have SDRPlay2, both of them having the same problem - when you see and hear the station, there is absolutely no guaranty that it is really there.

But the thing is, that this stations are really on 15MHz:

So, that's a bit annoying, and its not very easy to determine what kind of signal is. Easy test - when dragging the spectrum with the mouse, fake stations are going in opposite directions.

I understand that its a basic principle of superheterodyne receiver and frequency conversion (and its cheap and entry-level SDR anyway). But is there a way to minimize the effect? I was able to remove fake stations from 15 to 5MHz by switching from "Zero IF" to "Low IF", but the sample rate in this mode is limited. And I'm not sure that they really removed but not shifted to another place.

PS: I think my next receiver will be definitely a DDC one

by NoelC
I see 'em too from time to time in SDRuno.

I guess this is one of the things that the advancements in bandpass filters are being made for.

You've gotta admit, though, the SDRplay is pretty good.

I have an RSP1A in a box here as a gift for a ham friend. I'm dying to find out if there's less of that sort of thing than in my RSP1.

by g1hbe
Changing sample rates will move the images in some cases. They won't disappear, they will just go somewhere else. Remember that before we had spectrum displays, we probably wouldn't have known about the spurious responses of our receivers, it's only now we can see wide sections of spectrum that we notice them.
A set of bandpass filters would be good, but of course that would defeat the '10 MHz spectrum display!' which is a selling point.
DDC's will suffer similar problems (but fewer as there is no superhet front end) if they don't have front-end filtering too. The famous Perseus DDC notably uses a set of 10 filters from DC to 30 MHz, none of them wider than about 2 MHz I think.
I use filters for 0 to 100kHz, the MW band, the 160m amateur band and then a tunable filter for the rest. They get rid of the unwanted signals, but the waterfall & spectrum displays become a bit compromised!

by N4TKO
i don't have this problem as much with my sdrplay, as i do with my hackrf... but, there are a couple of things you can try, first, use only the amount of gain that you need (both on the RF and the IF settings). second (and i'm not sure if this is particular to the rsp1 or on the rsp2 as well) using lower sample rates has an effect on how many bits resolution the ADC uses. here's a bit from the tech specs of the rsp1a (can't find similar info on the rsp2, but i'm guessing it's the same)

and this will have an effect on performance. third, selecting your center frequency in relation to the frequency of interest and parts of the spectrum with really strong signals can minimize images like this (also the sample rate figures in to this, but i don't want to get the math too complicated). try moving the center frequency to the other side of your frequency of interest and see if it makes the images go away. you could also look into some type of bandpass filtering to keep form generating images from strong signals. i use two antenna tuners, one of them with a preamp, and i can pretty much limit what comes in from the antenna to the band of interest. this is very similar to what's called a preselector.

by someYguy
Not sure why but I've never had this problem. I always keep the RSP1 in Low IF mode and the bandwidth at either 600khz or 1.536Mhz, and I NEVER use IF AGC. I manually set the IF Gain at 37 and it stays there unless I'm on the MWBC band and I then set it at 49. I also rarely use the preamp except in the VHF airband. For software I use SDRSharp 1361 and HDSDR. Main antenna is an end-fed longwire about 50ft. long and about 40ft. up in the air. Computer is an old Dell Optiplex 360 running Windows 7 which I have devoted only to the RSP1 so it has no other 3rd party software and it is not connected to the Internet.

Using this system this way with these settings has made the RSP1 a joy to use at this location and I have minimal issues with images and overloading etc. but my settings might not be applicable in other cases.

In case anybody is interested, my little Dell Optiplex is a duo-core 2.8ghz machine with 3gb of memory and it does run the full 10mhz bandwidth of the RSP1 when needed.

I find that sensitivity of the RSP1 is still quite good with these settings, and I can hear a beat note from my HP signal generator on 14 mhz down to -119dbm when directly connected to it.

by NoelC
Here's an exercise for you if you feel you're not seeing aliased signals...

Hover your mouse over the 1 kHz digit of your frequency in your MAIN SP window and repeatedly move the mouse wheel, e.g., a few times a second. Try to keep a regular pace for a little while. If you slide the frequency up you'll see the lines representing signals in the waterfall moving diagonally down.

Notice that in some parts of the spectrum there are a few lines moving the other way (or changing faster than most of the lines). Those are the aliased signals.

The advice above to lower the signal level is good.

I find that engaging the AGC helps keep most aliasing / false signal problems at bay. 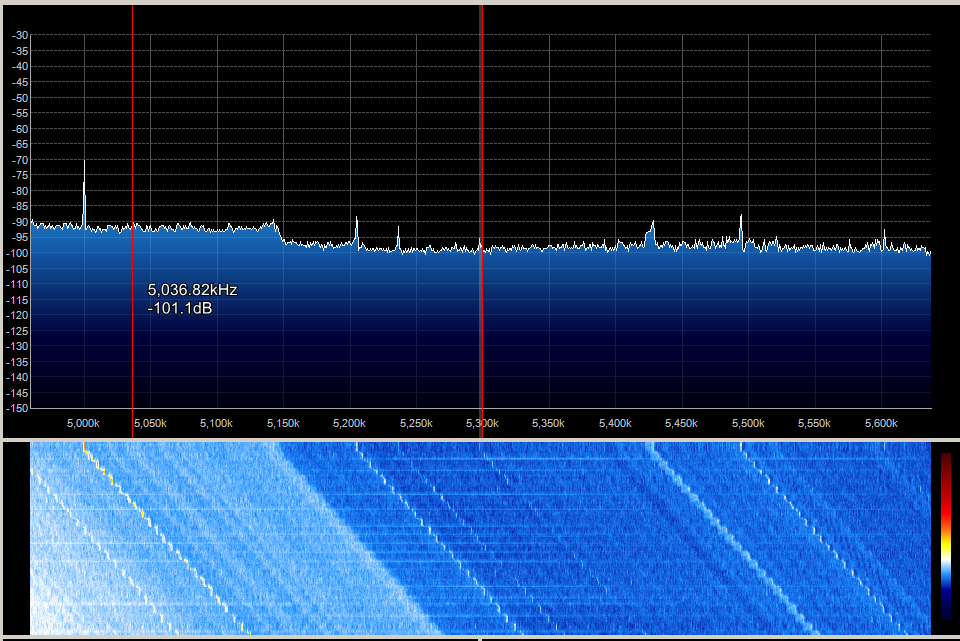 And going the other direction...... 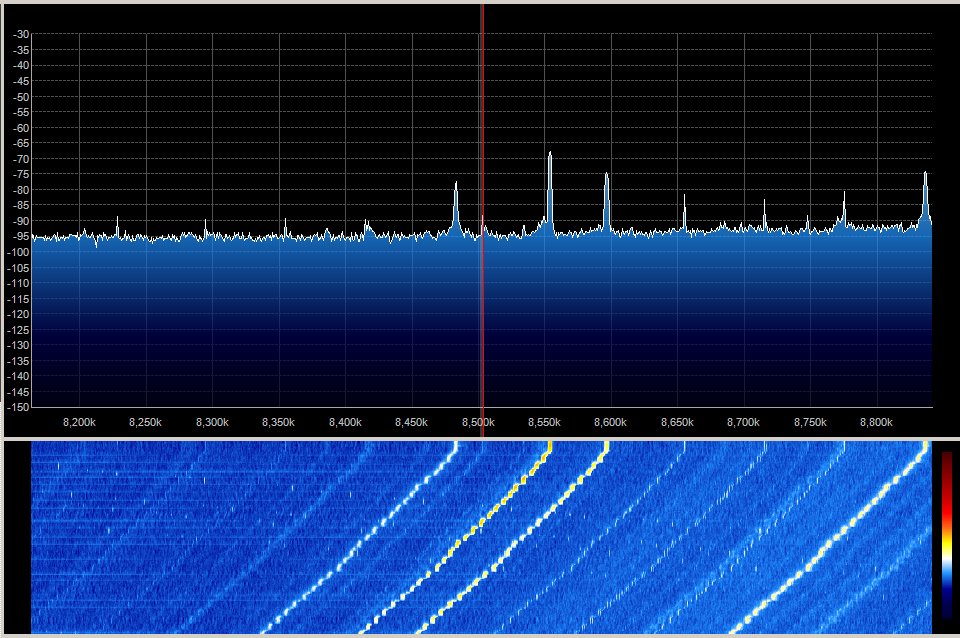 I don't see any aliased signals. Is it just that I'm lucky enough to have a good location or ?

EDIT: I did the same experiment using SDRUno and same result, no significant aliasing. I'm going to try again when the 49m SWBC band gets crowded later on.....

by NoelC
Look closely. You do have one signal in your second screen grab running diagonally the other way, with bigger jumps between the changes.

The amount of it could be device-related, though.

I just had an opportunity to try a new RSP1A as an alternate to my RSP1, with the same antenna, cabling, and computer, and I saw far fewer such signals. I fooled with the MW/FM filter and didn't see much difference in this behavior.

g1hbe wrote:Remember that before we had spectrum displays, we probably wouldn't have known about the spurious responses of our receivers, it's only now we can see wide sections of spectrum that we notice them.

by N4TKO
when i bought a Realistic DX-440 in the 1990s, the manual had a chart of known birdies. that radio had a first IF of 55Mhz, and a second IF of 455khz, so there wasn't a big potential for birdies, but a few did exist. i never actually tried to find them, and local noise sources probably masked them pretty well anyway. there are a few of causes of birdies, the first is interaction between various stages of the receiver, such as the local oscillator and mixer stages, or the local oscillator and the RF stage. often, these can be predicted when there are certain mathematical relationships between the frequency of the local oscillator, the frequency the radio is tuned to and the IF frequency. once the radio goes into production, there is little that can be done to control these. another source of birdies is intermodulation distortion in the signal chain caused by very strong received signals interacting in the RF stages to produce sum and difference frequencies. this type of birdie is identified easily because you can hear the audio from both signals causing the overload. getting rid of such birdies is as simple as attenuating the signals, or reducing the receiver's RF gain.
All times are UTC
Page 1 of 1
Powered by phpBB® Forum Software © phpBB Limited
https://www.phpbb.com/