SDRplay have just released version SDRuno 1.3 which has the new scanner feature. Although I have not had an in-depth look at it yet, when I installed it on WINE in Linux, I found that the ExtIO version no longer works but instead, generates an "Unhandled exception: page fault on read access..." error. A small blank Window with the title 'Sdruno' is spawned at the same time and closes along with the error dialogue when it shut down.

The first line of the detail shows:

Can I ask SDRplay whether an updated ExtIO version is planned for release at some point?

You cannot install 1.3 and 1.22 into the same directory as this will corrupt the ExtIO version.

It's important to note that whilst the ExtIO version of SDRuno is bundled with the 1.22 release, it is actually 1.06 so you will appreciate how far apart in development terms that is from what we have today with 1.3

It's likely that we'll release the ExtIO 1.06 version as a separate install so that people aren't having to install 1.22 when they don't need to.

Andy, thank you for the clarification.

@StandingWave First up, nicely done, I never explored the EXTIO version and could only confirm the standard SDRUno version exits right after starting

I'm using Wine 4.2 and I can get SDRUno to connect and rsp_tcp confirms it but I see no text on any of the buttons, making it unusable. 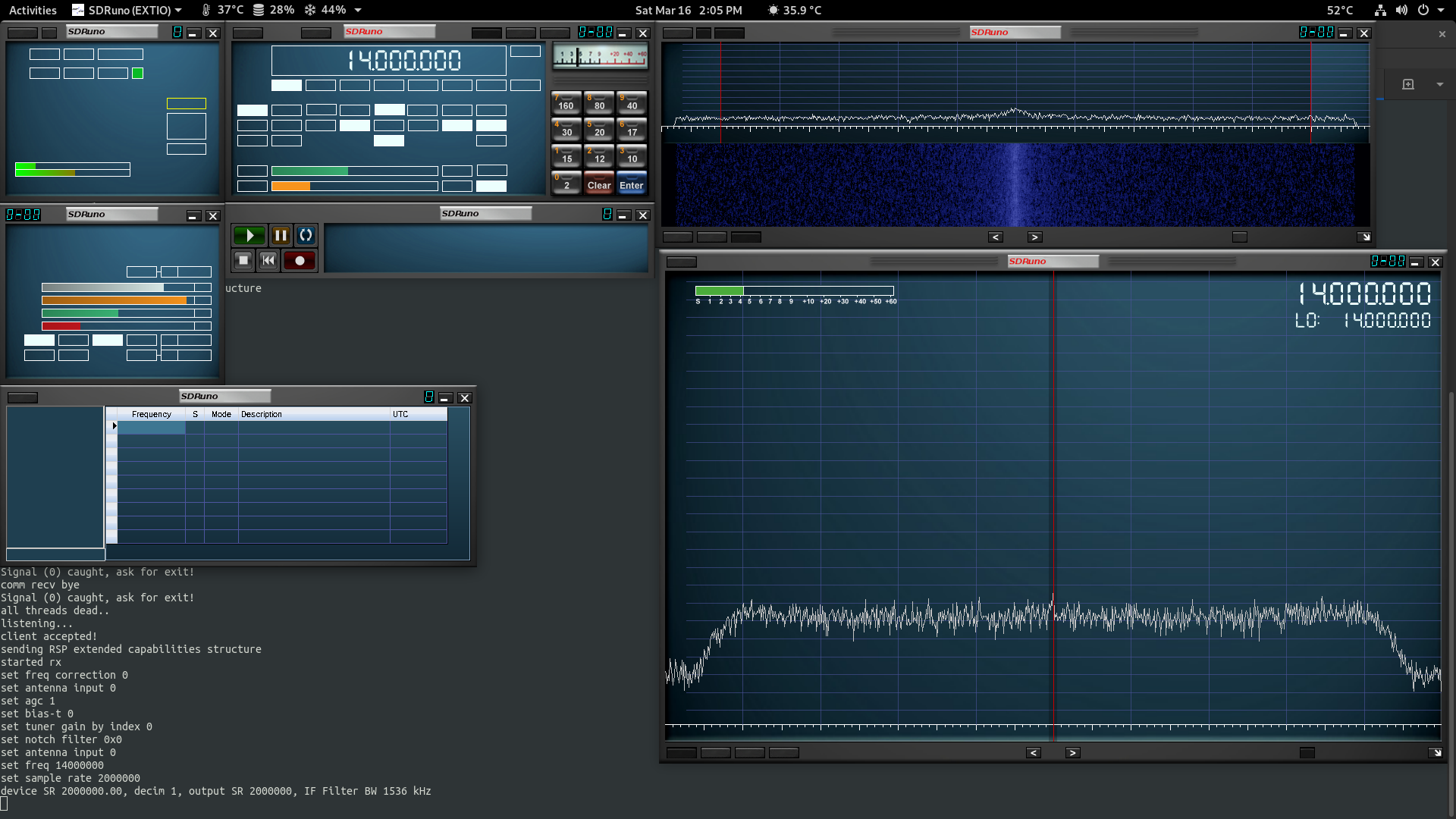 I've tried fixes from the Wine FAQ but the issue persists. Wine devs ask to upgrade to 4.2 before they'll offer any support.
Any chance you could test on a Ubuntu 18.10/Wine4.2 system?

Another quirk - If I start the standard non-EXTIO version of SDRUno, it shows all the windows momentarily with the proper text on buttons before failing due to lack of USB RSP detection. This leads me to believe there are some quirks when using rsp_tcp and it's not the Wine version that's causing the missing text.

I'm currently compiling Wine 4.0 to test, but I've been told it's likely not an issue between Wine versions.

sdrplay wrote: The reason that the ExtIO version had to stop development was that we have had to focus on RSP integration into SDRuno and quite a number of the improvements are not compatible with the support for other hardware. There may be some small improvements made to the ExtIO version at some point, but I can't say what they would be or when they would happen I'm afraid.

I sincerely hope there's enough development done on ExtIO to at least have the RSP's usable in the future. I have my RSP2Pro setup remotely and need to talk to it via an Odroid-C2, which works well BTW. Being able to use SDRUno would complete the linux experience for those of us who don't use Windows.
FWIW, getting it to work via Wine would save SDRPlay tons of development time over a native linux version.

For those who want to try, the extio also works with HDSDR on wine.

Strykar wrote:@StandingWave First up, nicely done, I never explored the EXTIO version and could only confirm the standard SDRUno version exits right after starting

Yup, the standard version just exits like it does on Windows when the RSP is not plugged in, because it can't 'see' the USB port.

This is the output from my wine --version command:

I just installed the wine-stable package and that's the version I ended up with.


Strykar wrote:I'm using Wine 4.2 and I can get SDRUno to connect and rsp_tcp confirms it but I see no text on any of the buttons, making it unusable.

Following your post, I tried installing the wine-staging package on my test system which is in a virtual machine. I had to completely remove/purge the wine-stable package first, but that's another story.... After eventually getting it installed, I ended up with WINE version 4.4.

I then tried SDRuno EXTIO and .... got exactly the same issue that you were having. The buttons were just empty boxes. Since I had version 4.4 installed, I went on to #winehq on IIRC where eventually someone suggested it might be a missing font. Rather than guessing which one, I just installed the package ttf-mscorefonts-installer. The good news is, that, after doing so, the button text did appear in all of the the boxes. I guess WINE just needed to have the correct TrueType MS font which evidently is not available in WINE by default. I must have installed the fonts on my working system some time ago and forgot that I had done so. Hopefully that will work in WINE 4.2 as well.

Incidentally, I was able to get RSP_TCP and SDRuno EXTIO running in WINE on Linux in Virtualbox with the RSP plugged into the USB port on the host PC, however the performance suffered badly to the point of being unusable. To be fair, it is perhaps a tall order to run a Windows program in WINE, which is already an emulated environment (WINE) in yet another virtual layer, i.e. the virtual machine. On the other hand, when the RSP was connected to the Pi instead, the performance seemed comparable to running SDRuno EXTIO in WINE directly on the host OS. It would therefore seem that the USB tunnel between the virtual machine and the host OS presents a substantial bottleneck to the streaming throughput. I'm not recommending running SDRuno EXTIO it in a virtual machine, but it seems that it is at least possible if the RSP is connected to another remote host such as a Pi or another PC.


nk2042 wrote:For those who want to try, the extio also works with HDSDR on wine.

Thanks for the update. I saw your thread a few days ago. I'm glad you got it working. I have now tried it myself as well and can confirm that it works quite nicely.

Just installed with your instructions on Ubuntu 18.04 64bit, wine version 4.0 with RSP1