The RSP2 is being used successfully for tracking and data collection for weather balloons. Refer to the articles and information at the following links:

I'm the NOAA engineer who wrote SkySonde, thanks for the mention. Those looking to try the software can download it from here, along with several other weather balloon tools (note that SkySonde only works with Intermet iMet radiosondes and attached ozone/water instruments):

Disclaimer: The availability of these tools to the general public does not condone attempts to recover balloon payloads that land on private property, government property, or hazardous locations. Predicted trajectories and landing zones are only approximate, therefore active tracking is required to accurately locate launched payloads. iMet radiosondes are typically used at 401-405 MHz depending on their configuration.

SkySonde Client connects to the server to display, plot, and output balloon data as it comes in: 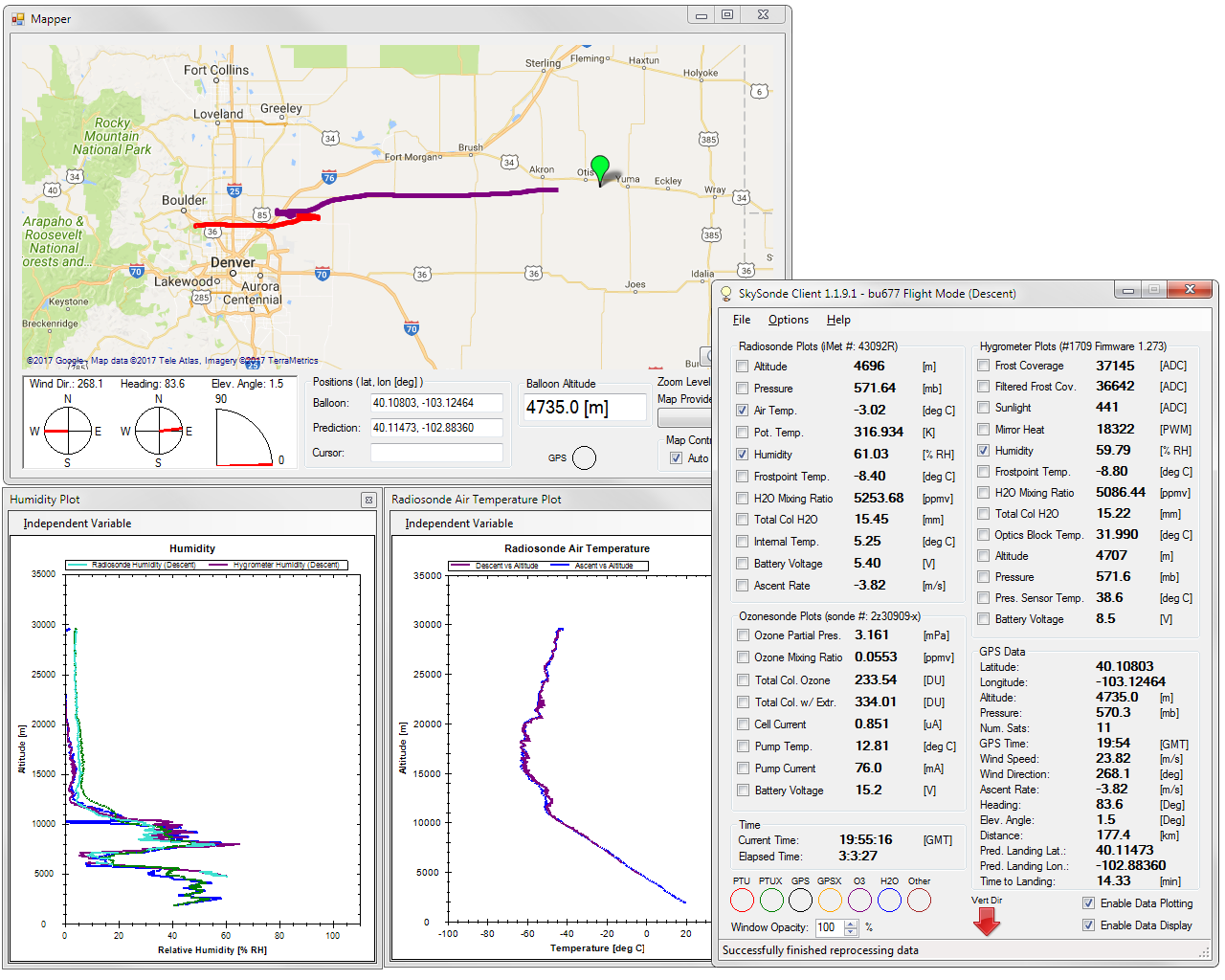 We have a lot of users/technicians in the field unfamiliar with software-defined radio. Walking them through the complexities of SDR Uno / SDR# / HDSDR would be far too difficult, so I decided to write a custom FM receiver directly into my existing SkySonde balloon telemetry software. I wrote it in C# and communicate directly with the driver API to receive I/Q samples at 2 MHz. After some filtering and decimating, I use an FM discriminator to convert I/Q into audio, then filter and decimate some more before passing the result to a software comparator and UART that decodes the Bell 202 signal and assembles full byte frames. Once a complete data packet is received, it is also CRC checked before being used.

This has been very successful. I received a balloon 318 km away with the RSP2 attached to a yagi with preamp, where our old system cut out at 156 km on the same flight. And the RSP2 would have received it longer if the battery on the radiosonde hadn't died.

Here is the basic setup: 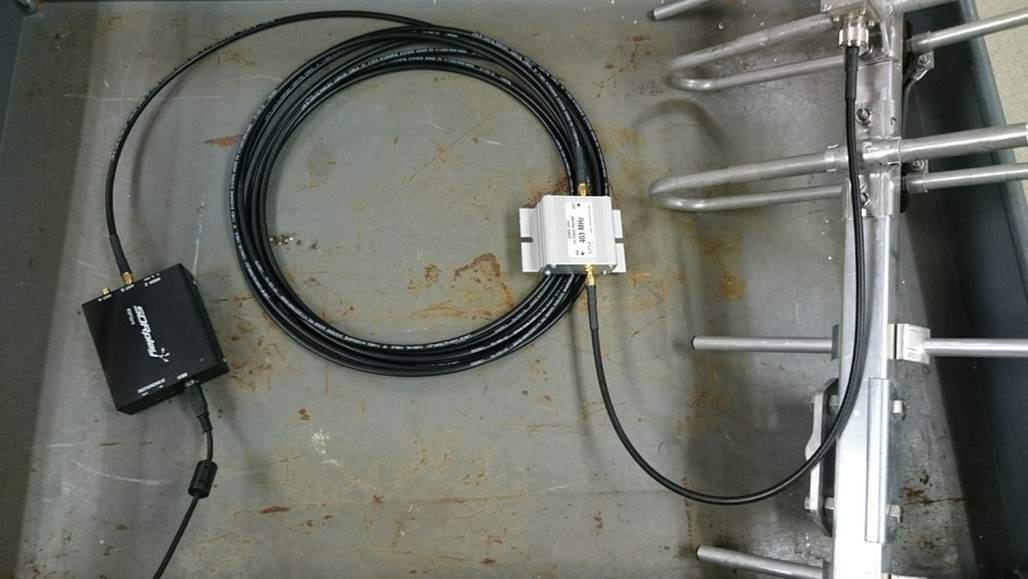 Just one cable between each part thanks to the bias tee power for the preamp. The software download webpage I linked has specifics on parts if anyone is interested.

SkySonde also supports RTL-SDR dongles if you manually download the 32-bit rtlsdr.dll from osmocom and move it to the install directory (can't include it directly due to licensing issues). They perform surprisingly well for being cheap, I've received full balloon flights with them too. But they are a lot flimsier compared to the nice RSP2 pro with the aluminum enclosure, and don't have the same gain options and ADC quality.

Here is my coworker launching one of our balloons south of Boulder, CO, USA: Unfortunately I don't have a way of decoding any other type of radiosonde. The Intermet sondes are open protocol, allowing anyone to write parsing programs. Other radiosondes made by Lockheed Martin (who makes the LMS-6), Vaisala, GRAW, Meteomodem, etc are all black boxes that would require serious reverse engineering to decipher. There are a few ham radio programs out there that have partially figured out various radiosonde protocols, I probably can't link them directly.

A lot of these other radiosondes are now supporting the XDATA protocol for sending down external instrument data, which was invented by another NOAA engineer. This is great for people (like us) building scientific instruments such as ozonesondes, hygrometers, etc. But the actual radio protocol to the ground is still unknown, requiring the software and sometimes receiving hardware from each manufacturer. Since Intermet radiosondes are open protocol, you can use any antenna/receiver you like and even write your own software if you choose. A cheap 1/4 wave whip with a preamp and any SDR will receive most of a balloon flight.
Last edited by bobasaurus on Thu Jan 01, 1970 12:00 am, edited 0 times in total.
Reason: No reason
- Allen Jordan, NOAA software/electrical engineer
Top

Thanks for the reply!

But, I'm very happy to at least be able to track the location. Here's one from 19-Nov this year:

While the LMS-6 is not on the list for what this SondeMonitor software will support, it does appear to support quite a few types of radiosondes. Hopefully the developers will add the LMS-6 at some point. https://www.coaa.co.uk/sondemonitor.htm

What open source software is that? I might want to try it someday. Your trajectory plotting looks good too. Feel free to use my balloon prediction software on our website (linked previously) for another source of balloon trajectory forecasting.
Last edited by bobasaurus on Thu Jan 01, 1970 12:00 am, edited 0 times in total.
Reason: No reason
- Allen Jordan, NOAA software/electrical engineer
Top

There are two scripts that I patched together from bits of many other people's work and Google searches to take the output from the LMS6 decoder, put it into a CSV file, and then render that to a KML file that continuously updates in Google Earth. So, the end results is that I can simply watch the balloon travel across the map in Google Earth in near real-time. (on a side note, I save the KML file to a shared Dropbox folder. So, anyone with the URL could add that as a "Network Link" in their own Google Earth and follow along with the balloon's progress)

If that work might be of use to anyone (with customization to fit your environment, of course), my scripts are at:

... and if you don't get the output parsed exactly right, adjust the "cut" command as needed. I recently had to do this as something changed in the spacing of the telemetry... perhaps the radiosonde serial numbers increase by a digit or something. I just adjusted the "cut" syntax to get the proper values for Lat/Lon/Alt.