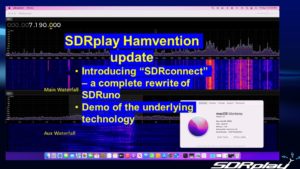 At Hamvention in Dayton, Ohio, SDRplay demonstrated the core underlying technology behind what we’re calling “SDRconnect”

At Dayton we showed the completely rewritten Core DSP engine for Spectrum and Waterfall displays – with the prototype software running on a Mac M1 computer.  We also showed  the networking capability by remotely accessing an RSP based in the UK.  In June we showed the same demo running on Linux on a Raspberry Pi at Ham Radio, Friedrichshafen.

Our software team have a lot to do to complete the graphical user interface.

Work is underway on the new graphical user interface which:

SDRplay plans to release the first version of SDRconnect before the end of 2022.

SDRplay is planning that SDRconnect will fully support the older obsolete RSP2 and RSP2pro products, although the original RSP1 (phased out in 2017) cannot be supported by SDRconnect.

(SDRuno V1.42 will continue to be available for RSP1 users).

The new graphical user interface will bring a lot of advantages based on what users have been asking for – like more consistency in the way panels and menus are organised making it more intuitive and easy to use, and the ability to lock panels together.

The SDRuno roadmap can be found here: https://www.sdrplay.com/sdruno-roadmap/

In this video, we show both the above demos and answer some of your questions on SDRconnect:

Please note that the API and hardware driver from SDRplay are not ‘Freeware’. These packages are commercial software for use in conjunction with genuine SDRplay products only. This software along with SDRuno is not licensed for use with any hardware other than that developed and sold by SDRplay Ltd. By downloading this software, you agree not to use it in conjunction with anything other than genuine SDRplay hardware.