The Sapienza University of Rome have just shared with us, an interesting paper which has just been published in the Astronautics journal “Acta Astronautica“. It describes a STRATONAV experiment designed to test the precision of the VOR (VHF Omni Range) aircraft navigation system in the stratosphere.

The objective of the STRATONAV  experiment was to test some VOR receivers in the stratosphere, flying on the BEXUS balloon at heights of up to  28 km in order to check the functionality and accuracy of the VOR system from the ground to the stratosphere.  By  collecting the receivers’ VOR data and comparing it to the GPS ground track of the balloon they were able to understand what improvements could be made for future stratospheric flight navigation systems.

The main payload was composed by two types of VOR receivers, a commercial portable receiver and a Software Defined Radio which was an SDRplay RSP1 alongside the bus and positioning, attitude and temperature sensors.
STRATONAV succeeded in collecting VOR radials for the whole duration of the balloon flight. The results proved that VOR can be used as back-up navigation system for stratospheric platforms, ensuring a reliability
improvement, while being applied to smaller payloads as primary system for a cost and complexity reduction of experiment developments. The paper analyses the collected VOR data during the balloon flight. Accuracy and
performance plots with respect to distance from the VOR stations and altitude are presented and discussed. The mean errors and standard deviations from all stations for both the receivers are shown with an analysis over the
recorded errors. Finally, future perspectives, analyses and applicability of the research are presented. 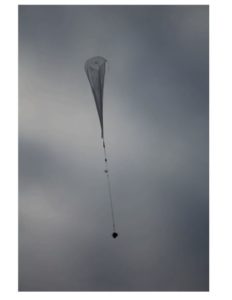 Above: The BEXUS 22 flight train at launch.  On its way to the stratosphere with an RSP on board.

All the “SDR data”  mentioned in the paper was collected by the RSP, with some of the phases of the flight shortly after sunset, so the outer temperature was around -80°C!

Later projects at Sapienza University of Rome have used RSPs and successfully  demonstrated the suitability of the VOR navigation system for altitudes as high as  32.3 km

You can read the full paper by going to https://authors.elsevier.com/a/1bppq_29e7-Lnc