Over on the RTL-SDR.com forum and on YouTube there has been recent debate and discussion surrounding the ethics of receiving private and/or sensitive information using SDR receivers.

We thought it important to make very clear SDRplay’s position on this.  An RSP together with a computer makes a radio receiver.  It can receive signals anywhere in the radio spectrum from 1kHz to 2GHz. It can demodulate most forms of analogue audio modulation using the SDRplay-provided SDRuno software.  That same software can be connected via a “virtual audio cable” to other 3rd party decoding software for reproducing images, TV ,digital audio or indeed any form of control interface. SDRuno includes a fully integrated scanning feature.  Additionally, the published APIs document how to provide a digitised signal source of up to 10MHz of radio spectrum into other 3rd Party processing application software.

In the case where the received signals are also encrypted for security purposes, it may be illegal to decrypt such signals.  The law will be clear on this country by country and we encourage everyone to follow their local laws.  For example, here in the UK, the OFCOM guidelines regarding interception of messages states: “It is an offence for an unauthorised person to use wireless telegraphy apparatus with intent to obtain information as to the contents, sender or addressee of any message whether sent by means of wireless telegraphy or not, of which neither the person using the apparatus nor a person on whose behalf he is acting is an intended recipient.”

We encourage all RSP users to act responsibly and follow their local laws. 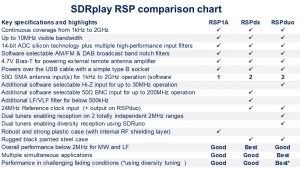 All RSPs (including older RSP, RSP2 and RSP2pro models) cover 1kHz to 2GHz with no gaps