Superfest and the UK National Hamfest

Last weekend we met lots of new people and caught up with many customers and friends at 2 big amateur radio events separated by 4000 miles.  In the USA Steve, KI5ENW was at the Ham Radio Outlet “Superfest”  in Milwaukee running demos and talking about SDRs:

Meanwhile in the UK it was the UK National Hamfest in Newark where the rest of the SDRplay team had many simultaneous demos running as outlined in this short video taken on the set-up day:

There was a lot of interest in the diversity demos in particular.   Unfortunately we didn’t film it, but what worked very well for HF noise reduction was having a Bonito megaloop outside picking up good signals on HF and a Boniwhip inside picking up only a weak signal and lots more noise.  With manual adjustment of amplitude and phase we showed how effective this could be on HF using diversity tuning for noise cancellation. The setup is described here in the medium wave (MF) example:

Here are a few more pictures from the SDRplay stand at Newark: 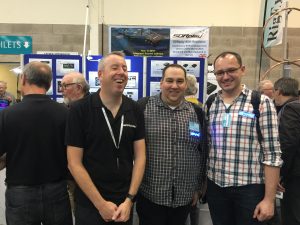 Ian with Christian and Matthias from Funk24 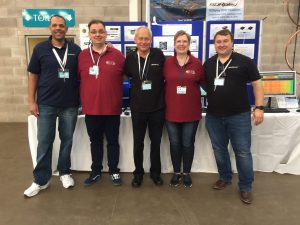 Mike, KD2KOG over from Florida plus Jon and Andy from SDRplay with Petra and Dennis from Bonito 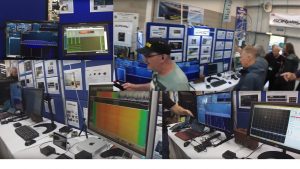